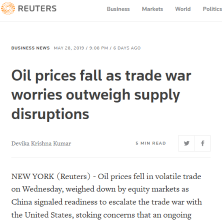 Oil prices fell sharply on Wednesday as China signaled it would play the rare earths card in its trade war with the United States, stoking concerns that an ongoing stand-off could hurt crude demand.

Supply constraints linked to OPEC output cuts and political tensions in the Middle East offered some support, however.

Both contracts are set for their first monthly decline in five.

In a sign of escalating tensions between the world’s two biggest economies, China signaled it was ready to use its dominant position in rare earths to strike back in a trade war with the United States, Chinese newspapers warned on Wednesday.

While China has so far not explicitly said it would restrict rare earths sales to the United States, Chinese media has strongly implied this will happen.

“China is the world’s biggest producer of these highly-prized raw materials and is poised to use them as leverage in its trade spat with Washington,” London brokerage PVM said.