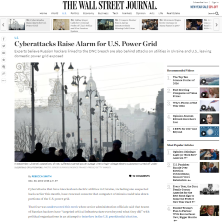 Cyberattacks that have knocked out electric utilities in Ukraine, including one suspected hack earlier this month, have renewed concern that computer criminals could take down portions of the U.S. power grid.

That fear was underscored this week when senior administration officials said that teams of Russian hackers have “targeted critical infrastructure even beyond what they did” with political organizations in an attempt to interfere in the U.S. presidential election.