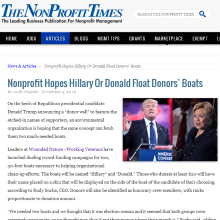 On the heels of Republican presidential candidate Donald Trump announcing a “donor wall” to feature the etched-in names of supporters, an environmental organization is hoping that the same concept can fetch them two much-needed boats.

Leaders at Wounded Nature –Working Veterans have launched dueling crowd-funding campaigns for two, 30-foot boats necessary to helping organizational clean-up efforts. The boats will be named “Hillary” and “Donald.” Those who donate at least $20 will have their name placed on a skin that will be displayed on the side of the boat of the candidate of their choosing, according to Rudy Socha, CEO. Donors will also be identified as honorary crew members, with ranks proportionate to donation amount.