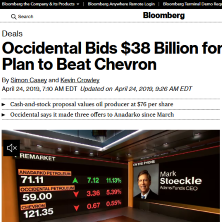 Occidental Bids $38 Billion for Anadarko in Plan to Beat Chevron

The first major bidding war has broken out in the Permian.

After being rebuffed several times, Occidental Petroleum Corp. on Wednesday made public a $38 billion offer to buy Anadarko Petroleum Corp., seeking to break up a proposed takeover by Chevron Corp. The $76 per share cash-and-stock bid for The Woodlands, Texas-based oil and natural gas producer is 20 percent more than Chevron’s $33 billion April 12 agreement.

The acquisition would be the largest ever proposed by Occidental, which has a market value of $46.6 billion, and would be the biggest purchase of an oil producer in at least four years. It would require Anadarko to pay a $1 billion breakup fee to Chevron. Occidental’s offer would pull together two second-tier oil and natural gas producers, as opposed to Chevron’s bid to create another “ultramajor” to rival Exxon Mobil Corp.

“This highlights the potential value of the Permian,” said Rob Thummel, managing director at Tortoise Capital Advisors, which manages energy-related assets. “Chevron will fight because acreage in Permian fits so well with its existing acreage, increasing the potential for better-than-expected operational synergies.”