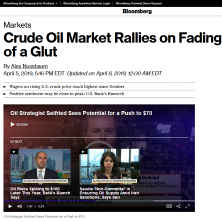 Crude Oil Market Rallies on Fading Fears of a Glut

The oil market has all but forgotten last year’s price crash.

Money managers haven’t been this optimistic about U.S. oil prices since early October, just before the crude market began a steep decline on fears of a global oversupply. Crude made a steady comeback this year and sentiment has climbed alongside it, with the net-long position rising for the sixth straight week in data posted on Friday.