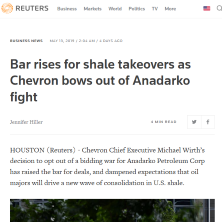 Chevron Chief Executive Michael Wirth’s decision to opt out of a bidding war for Anadarko Petroleum Corp has raised the bar for deals, and dampened expectations that oil majors will drive a new wave of consolidation in U.S. shale.

Wirth last week ruled out increasing his $33 billion offer for Anadarko after being outbid by Occidental Petroleum Corp, walking away from a company he had described as a perfect match. Chevron received a $1 billion breakup fee that it will use toward share buybacks.

The decision will make rivals think twice about splurging on companies operating in the largest U.S. oilfield, but will not put an end to shale deals given the weak valuations of independents, analysts said.