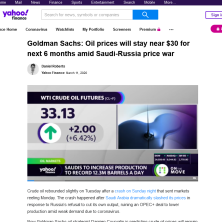 Goldman Sachs: Oil prices will stay near $30 for next 6 months amid Saudi-Russia price war

Crude oil rebounded slightly on Tuesday after a crash on Sunday night that sent markets reeling Monday. The crash happened after Saudi Arabia dramatically slashed its prices in response to Russia’s refusal to cut its own output, ruining an OPEC+ deal to lower production amid weak demand due to coronavirus.

Now Goldman Sachs oil strategist Damien Courvalin is predicting crude oil prices will remain low, near $30 per barrel (WTI crude was at $60 per barrel in January), for at least the next six months.