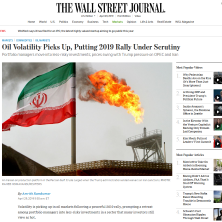 Volatility is picking up in oil markets following a powerful 2019 rally, prompting a retreat among portfolio managers into less-risky investments in a sector that many investors still view as hot.

U.S. crude tumbled nearly 3% Friday, its largest one-day drop of the year, after earlier in the week hitting its highest level in nearly six months. The slide followed comments from President Trump, who said he encouraged the Organization of the Petroleum Exporting Countries to increase supply and keep prices low.

Prices surged earlier in the week after the Trump administration surprised some market participants by ending waivers on Iran sanctions that allowed some buyers to continue purchases from the Islamic Republic. Last week marked the first time in nearly two months that oil logged multiple moves of at least 2.5% in either direction.

The moves are putting investors on edge because of the narrow supply-demand balance heading into the U.S. summer driving season. The decision to end the sanctions waivers threatens to remove even more oil from global markets at a time when U.S. sanctions against Venezuela and an ongoing conflict in Libya have already resulted in lower supply from those countries.

Even with the U.S. producing record amounts of oil, many investors remain unsure how quickly OPEC and its allies would fill any impending production gaps, opening the door to large price swings in either direction.

“That timing difference could cause a short-term spike in oil prices at a time when you’re going to start seeing summer vacations and the driving season begin,” said Rob Thummel, who manages energy assets for Tortoise, an asset manager based in Leawood, Kan.