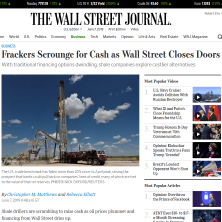 Shale drillers are scrambling to raise cash as oil prices plummet and financing from Wall Street dries up.
The companies behind the U.S. fracking boom are turning to asset sales, drilling partnerships and other alternative financing to supplement their cash flow. These forms of funding often come with higher interest rates or carry other downsides, such as giving outside investors a hefty share of future oil and gas production, but are gaining traction as drillers face dwindling access to traditional sources of capital.

Fracking companies are feeling intense pressure from investors to live within their means after years of losing money. But most are still struggling to generate positive returns, a situation now compounded by falling oil prices. The U.S. crude benchmark has fallen more than 20% since its April peak to below $53 a barrel Thursday, raising the prospect that banks could pull back on companies’ lines of credit, many of which are tied to the value of their oil reserves.

Producers have mostly avoided borrowing in 2019 as they aim to show investors they are sincere about austerity. There hasn’t been an issuance of public equity by a fracking company since late last year, the longest gap since 2014, consultant Rystad Energy said. Meanwhile, bond issuances by shale companies are on pace to reach their lowest levels in more than a decade, according to data analytics firm Drillinginfo.

Only a tenth of large shale companies reported positive cash flow in the first quarter of 2019, according to a Rystad Energy analysis of 40 drillers. To sustain or increase production, the companies need to drill new wells—and to drill, they need money, analysts say.

The financing crunch threatens shale companies’ ability to maintain the production boom that has made America the world’s top oil producer and ratchets up the pressure to consolidate. A wave of bankruptcies is also a possibility should oil prices remain low, say analysts.

Some shale companies are dipping their toes in the junk bond markets, where interest rates have begun to soar, lenders say. Others are exploring drilling joint ventures in which an investor pays for the cost of drilling a group of wells in exchange for most of what is pumped early on, often a well’s most productive time.

Pioneer Natural Resources Co., one of the top shale companies in the Permian Basin of Texas and New Mexico, is looking to pay for drilling some of its less promising acreage through such a partnership, known in the industry as a drillco. Scott Sheffield, Pioneer’s chief executive, said in an interview that the company is seeking the financing for wells it would otherwise not drill for 10 to 15 years.

“It’s a way to keep acreage and monetize it,” Mr. Sheffield said. Describing the current climate for shale companies, he said, “It’s been a 10-year run and the equity markets are closed, and the investors want return to themselves.”

Producers have been forced to get creative about financing because Wall Street began shutting off the cash spigot last year after frackers routinely failed to turn a profit over the last decade. In 2018, new bond and equity deals dwindled to their lowest level since 2007. Companies raised about $22 billion from equity and debt financing last year, less than half the total in 2016 and almost one-third of what they raised in 2012, analytics firm Dealogic said.

More than a dozen of the largest U.S. shale producers still have access to traditional bank financing, lenders say. But smaller companies, whose output makes up the vast majority of shale production, are finding it hard to secure inexpensive cash infusions.

“To get investors back to the sector, they need cash flow now,” said Rob Thummel, a portfolio manager for Tortoise Capital Advisors, which manages about $21 billion in assets. “They’re going to give up a lot in order to do that.”