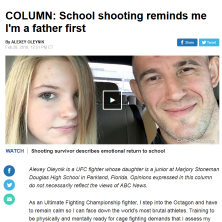 As an Ultimate Fighting Championship fighter, I step into the Octagon and have to remain calm so I can face down the world’s most brutal athletes. Training to be physically and mentally ready for cage fighting demands that I assess my opponent’s fiercest skill — perhaps a left-leg kick or a knock-out jab — and develop a strategy to win.

However, nothing in 52 professional fights was as terrifying as a text I received on Valentine’s Day from my 16-year old daughter, Polina.

“Daddy, there is a shooting at my school.”

I read the text again just to make sure it was correct — it was. As the father of five kids, ages 2 to 16, I was consumed by thoughts of death and violence. My daughter is a student at Marjory Stoneman Douglas High School in Parkland, Florida, and was texting me from the mass shooting that would claim 17 lives and injure many more. Thankfully, Polina survived and was uninjured, but for several hours I struggled to retain the composure I have during fights. Her text reminded me that I am a father first, and a fighter second.