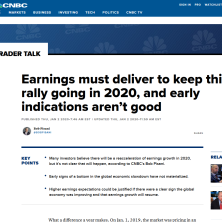 Earnings must deliver to keep this rally going in 2020, and early indications aren’t good

What a difference a year makes. On Jan. 1, 2019, the market was pricing in an earnings recession — an expectation that earnings would fall dramatically during the year.

Stocks were cheap. When the market realized a recession was not imminent, stocks took off.

Fast forward one year and the opposite is happening. “The economy is strong, but stocks have gotten expensive,” said Nick Raich, who follows corporate earnings as founder of the Earnings Scout.

“This year, the market is pricing in reacceleration of growth, so the markets are risky for a different reason,” Raich said.

Raich’s concern: Early signs for a bottom in global growth expectations — and for earnings — are not materializing.

In the last few weeks, 15 companies have reported earnings, all with quarters that end in November, including bellwethers such as FedEx, Oracle, General Mills, Adobe, Micron, Autozone and Costco. After seeing the guidance, analysts cut first-quarter estimates on 10 of the 15 companies, including significant downward revisions in FedEx, Nike, Micron, General Mills and Carnival.

“These 15 companies are enough of a representative sample that indicates a high probability most S&P 500 companies will have their EPS expectations lowered in the weeks and months ahead,” Raich said in a recent note to clients.

The problem is the market believes there will be a reacceleration of earnings growth in 2020, after a torrid pace in 2018 that followed tax cuts.

Stock prices are reflecting those rising expectations. At the end of 2018, with fears of an earnings recession on everyone’s mind, the forward earnings multiple for the S&P 500 was 13.9, well below the historically normal range of 15-16.

Today it stands at 18, a pricey multiple, even with a nearly 10% earnings growth forecast.

Raich emphasized that a higher earnings multiple could be justified if there were a clear sign the global economy was improving and that earnings growth will resume, but that is still not clear.

Jim Besaw, chief investment officer of GenTrust, a registered investment advisor, which, along with its affiliate, manage $2.5 billion in assets, agrees that prices are stretched, but he anticipates mid-single digit earnings growth in 2020.

His thinking is that most analyst estimates overstate the final numbers by 3 to 4 percentage points, so 9% earnings growth would translate into 5% to 6% growth.

I asked Besaw to handicap the biggest risk to stock prices in 2020. Here’s his take:

Trade and tariffs: Lower risk. Not as much as a risk in 2020 because President Donald Trump wants to be reelected, though it is a risk longer-term.

Fed: Lower risk. The Fed will likely remain neutral. Besaw noted that stocks were at risk when the Fed began hiking and reducing its balance sheet.

U.S. consumer: Lower risk. U.S. consumers have successfully deleveraged a good part of their debt, so risk of a dramatic pullback in consumer spending is lower.

Buybacks: Moderate risk. “We’ve been buying back stock for 10 years, but there may be a limit” to how far it can go, he said. He points to Bed Bath and Beyond, which has shrunk its float 30% in five years, but its stock has dropped almost 80%. At some point, he said, you need to find ways to keep growing the business.

Global growth: High risk. It’s unlikely 2019 marked a bottom in the global economy, as so many are anticipating. “Nothing has really changed in Europe. Things turn around when there are structural reforms, or when capital gets even cheaper,” he said. “None of that has changed.”

Wage growth: High risk. Worries about margin erosion have dogged stocks for a decade, but Besaw says wage growth — which would erode margins — is indeed an issue. “Capital has been winning over labor for 30 years,” Besaw said. “At some point that has to stop.” Whether it is simply wage inflation, or something broader like Universal Basic Income, is not clear, he says, but wages will likely be higher in years to come.

Still, with stocks at historic highs, lower risk on a few key factors may not automatically translate into higher prices in 2020.

“The biggest risk to the markets may simply be the higher expectations,” Raich said. “Lower expectations are always better for the market, because it’s easier to overcome.”