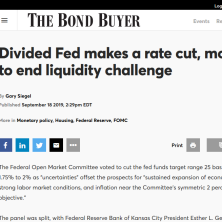 The Federal Open Market Committee voted to cut the fed funds target range 25 basis points to 1.75% to 2% as “uncertainties” offset the prospects for “sustained expansion of economic activity, strong labor market conditions, and inflation near the Committee’s symmetric 2 percent objective.”

But FOMC member unanimously voted to reduce the interest paid on reserves to 1.8%, effective Sept. 19. “Setting the interest rate paid on required and excess reserve balances 20 basis points below the top of the target range for the federal funds rate is intended to foster trading in the federal funds market at rates well within the FOMC’s target range,” the FOMC said in a statement.
The Fed, on Wednesday, injected another $75 billion of liquidity in the market as demand pushed short-term rates above the Fed’s target range, which at the time was 2.00%-2.25%.

“We believe this repo event is in response to a short-term surge in bank demand for liquidity and is not a crisis in confidence similar to that of 2007-2008,” said George Rusnak, co-head of global fixed income strategy at Wells Fargo Investment Institute.

While the shortage is not a big deal for the short-term, it could be signaling the Fed needs “to examine whether there’s enough liquidity in the system,” according to Luke Tilley, chief economist at Wilmington Trust. “We’re living in a different market than we were before 2008.”
Fed Chair Jerome Powell has said that the market would determine where the Fed’s balance sheet should be, and having had to inject reserves for two consecutive days, the market “can be signaling to the Fed where demand for total reserve is,” Tilley said.

The Fed may need to increase the size of its balance sheet, since “excess reserves are clearly not excess,” meaning they’re not beyond what banks want and need to hold, Tilley said.
The challenge will be communicating that the balance sheet addition would be based on liquidity needs, not a monetary policy move, he said. And the Fed reacted appropriately to this “blip” and can add a standing repo facility to avert future shortages.

“High leverage, dependence on overnight and shorter dated repo coupled with a steep decline in excess reserves over the past several years has left the repurchase agreement market vulnerable to sharp moves higher when funds leave the system,” said Hugh Nickola head of fixed income at GenTrust.