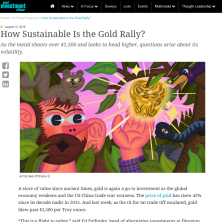 How Sustainable Is the Gold Rally?

As the metal shoots over $1,500 and looks to head higher, questions arise about its volatility.

A store of value since ancient times, gold is again a go-to investment as the global economy weakens and the US-China trade war worsens. The price of gold has risen 42% since its decade nadir in 2015. And last week, as the tit-for-tat trade tiff escalated, gold blew past $1,500 per Troy ounce.

“This is a flight to safety,” said Ed Egilinsky, head of alternative investments at Direxion, noting how the yellow metal has languished for years until events propelled it aloft. “Gold has broken out of a six-year range, central banks are purchasing it, investment inflows into gold ETFs are strong,” he said.

Nowadays, a chorus of big-time financial voices are singing the praises of what legendary economist John Maynard Keynes once dismissed as a “barbarous relic.” Hedge fund kingpin Ray Dalio in July said rocky times are bringing a “paradigm shift” to markets and buying gold is “risk-reducing and return-enhancing.” French bank Société Générale last week even went so far as to recommend that gold make up 14% of a portfolio.

Amid such enthusiasm, gold may well rocket still higher in today’s unsettling world. Louise Yamada, who heads her own eponymous advisory firm, believes it soon will reach $1,800, the 21st century record set in 2011 (it attained an all-time, inflation-adjusted peak of $1,993 in 1980).

Here’s the funny thing about gold, though: Don’t count on it to maintain this high-flying level for the long-term. It’s very volatile, charging skyward when economic downturns, inflationary spikes, and international turmoil show their hideous faces.

When the world seems more benign, gold tends to lag. After the recession ended in the early 1990s, the international economy took off and the world seemed free from major conflicts. Those were not good days for gold investors, pointed out t. Back then, “gold went for $300,” he added.