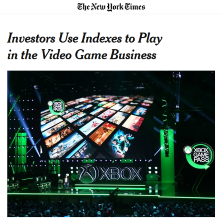 Investors Use Indexes to Play in the Video Game Business

Video gaming has gone from an activity conducted in arcades, dens and rec rooms to a mobile phenomenon where players meet, live and play in virtual space.

But it’s hard for investors to know where the best opportunities are. Investors have done very well recently by buying shares in exchange-traded funds that track the industry, or major components of it.

Big technology companies such as Microsoft, Google and Amazon are preparing to offer streaming video games, hoping to capitalize on a trend that lifted Netflix to dominance in the entertainment delivery business.

Then there are the equipment makers, like Microsoft with its Xbox console and Sony with its PlayStation. Both are rolling out upgrades.

Game publishers like Epic Games, Electronic Arts, Take-Two Interactive and Ubisoft may be poised to capitalize on the burst of streaming capabilities making their debuts over the next year, said Michael Pachter, an analyst at Wedbush.

The overall industry is expected to reach $180 billion in annual sales in the next year or so, according to the research firm Newzoo, compared with $137 billion in 2018. But there are plenty of reasons for caution.

Development costs are rising for games that quickly become obsolete, thanks to fast-changing technology. New cloud-based and streaming services threaten to cut into the sales of game equipment, as are games played on mobile devices like phones and tablets.

“It remains to be seen which dominant distribution model will emerge and how the economics for publishers and platform operators will ultimately play out,” Mr. Pachter wrote in a recent note.

For fund investors, there aren’t a lot of specific offerings, and the few that are around are relatively new. They track a variety of indexes.

The biggest video-gaming-specific fund, the ETFMG Video Game Tech ETF, which started in 2016, has only $92 million in assets. Expenses are 0.75 percent, and it gained 10.8 percent this year through June, according to Morningstar. It tracks the EEFund Video Game Tech index, and its top 10 holdings include Nintendo, Ubisoft and Glu Mobile.