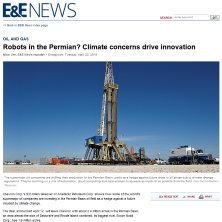 Chevron Corp.’s $33 billion takeover of Anadarko Petroleum Corp. shows how some of the world’s supermajor oil companies are investing in the Permian Basin oil field as a hedge against a future clouded by climate change.

The deal, announced April 12, will leave Chevron with about 2.4 million acres in the Permian Basin, an area almost the size of Delaware and Rhode Island combined. Its biggest rival, Exxon Mobil Corp., has 1.6 million acres.

If the companies’ plans work out, the whole enterprise — from the oil well to the refinery — will be largely automated to make it as efficient and profitable as possible, using artificial intelligence and cloud computing to squeeze every drop of oil from the rock.

Shale drilling is faster and cheaper than exploring for oil offshore or overseas.

While other international companies are hedging their bets about the energy industry’s future by buying renewable power companies and car-charging networks, Chevron and Exxon appear to be betting on the Permian Basin, and technology innovations for fossil fuels, to keep them on firm footing (Energywire, Feb. 19).

The quick returns in the Permian Basin can act as a hedge if there’s ever a slowdown in oil demand due to regulations or a change in the world’s energy mix because of a warming climate. Unlike a multibillion-dollar offshore project, which can take years to produce its first barrel of oil, the companies can reap quick profits and also walk away if the price drops.

“Nobody wants to be left with stranded oil at this point,” said Rob Thummel, a managing director at Tortoise Capital Advisors. “That’s one of the views about why shale’s changed the game globally for oil and gas. The ability to get it out and get it out quickly and then react based on what the price of oil is … make the returns much better.”