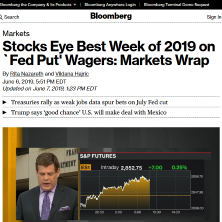 U.S. stocks rallied for a fourth day after weak jobs data added to bets the Federal Reserve will cut rates. Treasury yields and the dollar fell.

The S&P 500 Index was on pace for its best week since November on speculation the Fed will move to shore up the economy after a report showed employers added the fewest workers in three months and wage gains cooled. Technology shares led the advance, while banks dropped. The two-year bond yield headed toward its longest weekly slide since 2016. The peso climbed after President Donald Trump said there’s a “good chance” the U.S. will reach a deal to avert imposing trade tariffs on Mexico.