The Hidden Strength Behind Navy SEALs 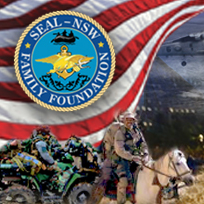 It was a fairly direct and pointed question, the type of question you’d expect from a woman who has worked on Wall Street her entire career.

“If my company supports your organization, tell me what the programs look like that we’ll be funding.”

Megan leaned back from her chair, gave me a wink and smile (as if to say “I got this”) and answered the question, hitting the ball out of the park.

It’s — to be candid — what I would have expected from a former pharmaceutical sales rep. But Megan has a higher calling now…she’s the wife of a Navy SEAL…a mom of four young children…and the programs the SEAL-NSW Family Foundation provide for her, her children, and other women who live half their married lives not knowing where their husbands are.

Their husbands, of course, are taking on our country’s most dangerous missions, enabling we Americans to live the lives we do, eliminating terrorists where they live, and doing it regularly in complete secrecy.

Megan and her fellow SEAL spouse, Kristen, were asked about the movie “American Sniper,” and whether it was an accurate depiction of what their husbands go through.

“My husband and I have an agreement that we’re going to see it together,” Megan said. “And he hasn’t been here to see it with me.

“But the men who have seen it tell us it’s the most accurate movie about what they go through that’s ever been made.”

On September 10, Megan, Kristen and their husbands, as well as 20 other SEALs and their spouses, will be in New York for their foundation’s first ever New York fundraising dinner. There will be a skydiving exhibition…a display of SEAL weaponry…and a talk by General Hayden. You can learn more here: www.navyseals.nyc

I will be there. Medal of Honor recipients Mike Thornton and Jack Jacobs will be there, thanking these brave families. I hope you and your companies will join us in making this a successful night for the SEALs and their families.