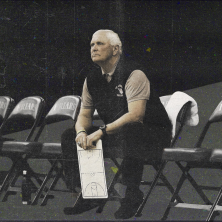 Over 45 years, Bob Hurley turned his Jersey City basketball program into an unlikely national power. Now, after 28 state titles and decades of staving off closure, St. Anthony is shutting its doors, and the Friars family is trying to cope with running out of miracles.


A few minutes before 7 on a warm May night in Jersey City, New Jersey, the first of 200 or so guests arrive for what one event organizer calls “the final celebration of life” for the fabled  basketball team. They climb up the brownstone steps to White Eagle Hall, the old gym about a mile from the school itself, where head coach Bob Hurley’s Friars, who never had a home gym of their own, practiced for the better part of three decades until 2003. As the attendees pull open the mahogany doors and walk into the main hall, they mostly gasp. They remember White Eagle as a dingy, cramped gym, but a $6 million renovation that began in 2012 and concluded this spring has produced an ornate concert venue. During the renovation, a crew wiping away grime on the ceiling discovered two handcrafted, stained-glass murals, and they ripped up the basketball court and refashioned it as bar counters and balcony flooring. Now, the onstage guitarist, sensitive to the occasion, plays only slow, acoustic jazz and blues.