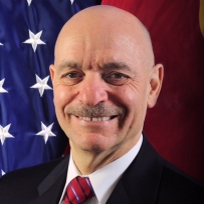 Commissioner Cassano led the United States’ largest fire department with more than 16,000 fire, EMS and civilian members, and an annual budget of $1.6 billion. He spent more than 44 years in the FDNY and held every uniformed rank prior to his appointment by Mayor Bloomberg in January of 2010.

Commissioner Cassano served as the FDNY’s Chief of Department – the highest-ranking uniformed officer – from 2006 through 2010, overseeing many of the agency’s most important bureaus including Fire and EMS Operations, Training, Safety, Fire Prevention and Communications. From 2001 to 2006, he served as Chief of Operations – a position to which he was appointed immediately after Sept. 11, 2001.

Both as Chief of Operations and Chief of Department, Commissioner Cassano played a crucial role in rebuilding the Department in the wake of Sept. 11 and the loss of 343 members of the Department. In the years that followed, more than 6,800 new firefighters were hired and more than 6,000 others were promoted to various officer ranks as the Department went through a difficult but remarkable resurgence. Under his leadership, the FDNY became better equipped, trained and prepared with the result being the lowest number of annual fatalities from fires in the history of the Department.

Prior to joining the FDNY, Commissioner Cassano served in the U.S. Army from October 1965 through July 1967 and was deployed to Vietnam in September 1966.

While a firefighter, he attended John Jay College of Criminal Justice and received a Bachelor of Science degree in Fire Science. Commissioner Cassano also received an Honorary Doctor of Laws Degree from St. John’s University in May 2013. In September 2009, Commissioner Cassano was awarded France’s highest decoration, the Légion d’honneur, by French President Nicolas Sarkozy.

“Sal’s experience will be a great asset to the firm, our partners and our clients,” said Bob Zito, founder of Zito Partners, who serves on the FDNY Foundation board. “The FDNY is not just the greatest fire department in the world; it is one of the world’s great brands thanks to the dedication and leadership of individuals like Sal. Our Advisory Board and our team at Zito Partners are thrilled to welcome Sal to our family.”

About Zito Partners
Zito Partners builds, energizes and defends brands. A boutique firm representing a select group of clients from a range of industries, Zito Partners believes in a “ready, aim, fire” approach – understand the client…develop the appropriate strategy against the key target constituencies…and execute against the plan. And through its strategic alliance with Ketchum, Ketchum Zito Financial, Zito Partners is assisting additional clients with their financial communications needs. For more information, visit www.zitopartners.com.