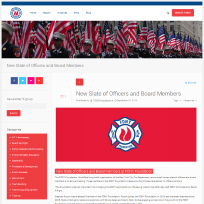 New Slate of Officers and Board Members

The FDNY Foundation, the official non-profit organization of the New York City Fire Department, announced its new slate of officers and board members at its annual meeting. Three members of the FDNY Foundation’s Executive Committee were elected to officer positions.