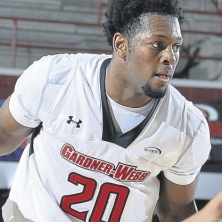 WARREN, NJ, April 13, 2017 – Tyrell Nelson, a forward who was a double-double machine for Gardner-Webb University, has chosen to be represented by InterperformancesUSA (IPZ), the company announced today.

The 6-foot-7 Charlotte, NC native has received honors since his freshman campaign when he was named to the Big South All-Freshman Team in the 2013-14 season. The following year, Nelson was recognized on the NCCSIA All-State Second Team. Nelson earned Second Team All-Big South Honors in both the 2015-16 and 2016-17 seasons.

In the forward’s senior campaign, he averaged 12.9 points and 7.0 rebounds per game. Over his collegiate career, Nelson posted 25 double-doubles and broke into the top 10 of Gardner-Webb’s record books. He ranks #5 in rebounding with 870 boards, and #8 in scoring with 1,651 points.

“I chose IPZ because of the complete team they have,” said Nelson. “They have people who are good at their job and know the right people to make my dreams of becoming a professional basketball player, a reality. I put my complete trust in them.”

“Tyrell is a solid and dependable forward,” said IPZ Managing Director of Basketball Shawn Farmer. “His size allows him to overpower defenders in the paint and get to the basket, as well as position himself in order to secure rebounds. Tyrell has a bright future ahead of him and IPZ is thrilled to have him.”