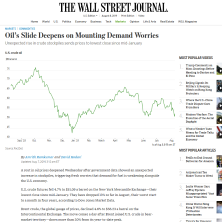 A rout in oil prices deepened Wednesday after government data showed an unexpected increase in stockpiles, triggering fresh worries that demand for fuel is weakening alongside the U.S. economy.

U.S. crude futures fell 4.7% to $51.09 a barrel on the New York Mercantile Exchange—their lowest close since mid-January. They have dropped 13% so far in August, their worst start to a month in four years, according to Dow Jones Market Data.

Brent crude, the global gauge of prices, declined 4.6% to $56.23 a barrel on the Intercontinental Exchange. The move comes a day after Brent joined U.S. crude in bear-market territory—down more than 20% from its year-to-date peak.

The slide in oil highlights the anxiety about the world economy that continues to jolt financial markets. U.S. crude tumbled nearly 8% in a single session last week after President Trump announced fresh tariffs on about $300 billion of Chinese imports, spurring worries that consumers will limit spending and economic growth will stagnate.

“The oil market is telling us the uncertainty here is significantly higher than several weeks ago,” said Rob Thummel, senior portfolio manager for Tortoise Capital Advisors. “Investors are looking for ways to take risk off the table.”