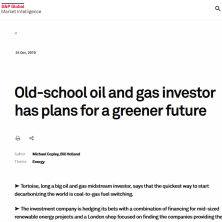 Kevin Birzer is chairman and CEO of Tortoise Capital Advisors LLC, part of asset-focused investment firm Tortoise Investments LLC. He has led the family of funds — many of which are heavily invested in oil and gas infrastructure — through the rapid changes brought on by the shale revolution.

Tortoise in September released its proposition for lowering carbon emissions, The Teal Deal, which posits that the quickest way to reduce carbon emission and sustain that reduction is to allow market forces to push coal out of the dispatch stack in favor of natural gas and renewables. Tortoise has also added a team of analysts based in London that is charged with finding investments in companies at the leading edge of the transition to a low- or zero-carbon energy economy.

Birzer recently spoke with S&P Global Market Intelligence about natural gas’ carbon reduction potential, the tensions between regulations and a free market, and where Tortoise is investing some of its $22 billion in assets under management to profit from coming changes in the globe’s energy mix. The following is an edited transcript of that conversation.

S&P Global Market Intelligence: The central thesis of the Teal Energy Deal seems to be that the key to getting immediate gains in reducing carbon emissions is coal-to-gas switching.