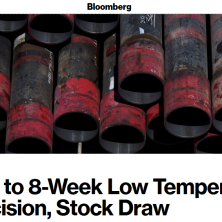 Oil’s slide to a two-month low on concern that China’s coronavirus outbreak may dent demand was tempered by an unexpected decline in U.S. crude inventories.

Futures recovered some ground after sinking as much as 3.5% in New York on Thursday. The U.S. government reported a 405,000-barrel decrease in crude stockpiles last week, in contrast to expectations for a build by analysts and industry-funded American Petroleum Institute. Also, gasoline stocks increased by less than forecast while those for heating oil posted a unexpected decline.

“The EIA data was constructive and favorable,” particularly since a crude stock draw was reported when the market was expecting a increase, said Brian Kessens, portfolio manager at Tortoise, a Kansas firm that oversees more than $21 billion in assets.