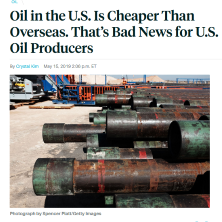 Oil in the U.S. Is Cheaper Than Overseas. That’s Bad News for U.S. Oil Producers

U.S. crude oil is priced at a near $10 discount to Brent, the international benchmark, the widest gap between the two since October of last year. That spread will create short-term winners and losers across the energy complex.

West Texas Intermediate spot prices were hanging out at $62 a barrel following a U.S. Energy Information Administration data release showing a surprise buildup in crude stockpiles. The EIA on Wednesday said that U.S. crude inventories rose by 5.4 million barrels for the week ended May 10.

U.S. Gulf Coast crude inventories have been on the rise, climbing more than 30 million barrels over the last six weeks through early May, almost four times the seasonal average, said Michael Tran, a commodity strategist at RBC Capital Markets, in a report published last week.

“North American balances are sloppy…U.S. inventories are high and would be higher had the U.S. not put a moratorium on imports from Venezuela or had the Saudis not made it a strategic imperative to cut exports to the U.S. Gulf to record low levels,” Tran said. He is bearish on U.S. crude inventories.

In addition, oil production in the Permian Basin of Texas and New Mexico has been rising even without the pipelines to move it out, said Brian Kessens, an energy portfolio manager at Tortoise Capital. “West Texas crude is trapped inland,” he said.