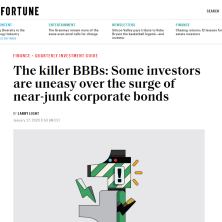 The killer BBBs: Some investors are uneasy over the surge of near-junk corporate bonds

Teetering on the edge of the abyss of a junk bond rating is no place that a company wants to be. But that’s where food producer Kraft Heinz finds itself.

The company is known, unkindly, as “Buffett’s Folly” because the sure touch of über-investor Warren Buffett seemed to falter with Heinz’s purchase of Kraft, which he engineered with the aid of private equity fund 3G Capital. Known for famous brands like Oscar Meyer lunch meats, Miracle Whip, Jell-O, plus the namesake ketchup and cheese, Kraft Heinz has a hard road in an era when fresh food is prized. Buffett, whose Berkshire Hathaway holds a big stake in the merged business, told CNBC that Heinz “paid too much” for Kraft.

Kraft Heinz is pushing to lower its debt, whittling $4 billion of the total from the merger. That includes its most recent round of debt reductions, some $2.3 billion, courtesy of “solid cash generation and divestiture proceeds,” noted spokesman Michael Mullen. Indeed, its free cash flow has increased, and Kraft Heinz recently sold its Indian beverage and Canadian cheese subsidiaries.