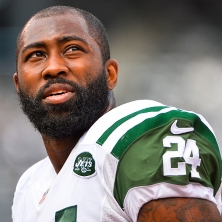 I board a late flight one night in early 2016 from Newark to Fort Lauderdale — had a couple of meetings in Florida and took a day on each side for some work in the sun.

I sit in my seat and the guy next to me — dressed well and very polite — nods hello. I do the same.

As passengers board (the male passengers), a number of them say, “Yo, Revis, how are you man? Great season.” He simply nods a thank you.

Then the buzz begins.

“Hey, man, you’re sitting next to The Island. You know how lucky you are?”

But after the third guy approaches me — with three hundreds in his hand and asks me to trade seats with him — I say, “Listen, leave the guy alone. And besides, I’m a Giants fan.”

We hardly talked…and nothing about football…as we taxi’d out to take off and left Newark. He had a place in Hollywood, Florida, and that’s where he was heading. We talked a little about the Hollywood Broadwalk, which as a Jersey guy I absolutely love. And that was it.

But once the “fasten seat belt” sign came off, the vultures started circulating.

He handled the fans and his admirers beautifully. The best “executive coach” would have been proud of the way he did it. Smiles…brief answers…a look back down to the text book he was reading to show he wanted to get back to work…and the fans understanding that because of the class way he handled it.

One question from a fan did strike me, as did the way Revis responded.

“Yo, ‘Reeve,’ who’s the best quarterback in the league?”

“OK. Figured that. But which one is better?”

Revis paused, and then said, “I have to go with Tom. I had the chance to play with him for a year. There isn’t a better leader in the locker room. He’s the best. Peyton is amazingly accurate. But Tom is a great leader.”

While I’ve always respected Brady, that comment from Revis made me realize how great a quarterback he must be. But more importantly, it was the way Revis answered the question — straightforward…sincere…and candid.

I saw Revis at the opening party for the Barcelona soccer club New York office a couple of months later.

I walked up to him and said, “you shouldn’t remember me…but I sat next to you a couple of months ago on a flight to Fort Lauderdale.”

I got a big smile.

“I remember,” he said. “You wouldn’t sell your seat. Thank you.”

I’ll stay hopeful the news of the Pittsburgh incident is overblown. My impression that night was this is a good guy…a guy who realizes that athletes — in their actions — need to re-pay fans for their support…and who seemed to understand that some kindness and patience eventually gets rewarded.