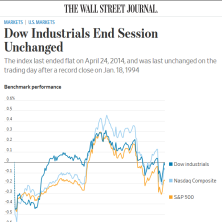 The Dow Jones Industrial Average closed unchanged for the first time in more than five years, hovering at its record.

President Trump’s speech at the Economic Club of New York was expected to be the highlight of the session, but he said little new about the state of trade talks between the U.S. and China.

“They are dying to make a deal. We’re the ones who are deciding whether we want to make a deal,” Mr. Trump said, adding the parties are close to a phase one agreement.

The stock market showed little reaction during the speech but pared some of its earlier gains as the afternoon progressed.

Investors have been particularly sensitive to trade-related headlines in recent months and have pushed stocks higher lately as tensions have been defused.

They have also credited the Federal Reserve’s interest-rate cuts for supporting stocks.