March Insanity… But What About The Students? 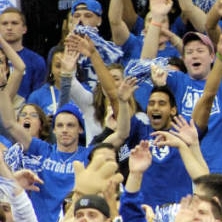 One of the most fun – but most scrutinized – jobs in sports has to be picking the 68 teams in the NCAA basketball tournament.

The pundits suggest the group got the 68 right this year…although with the usual complaints from those who didn’t make it and are instead relegated to the NIT.

But in a perfect world, I’d have a wish…that it was easier for the students who supported their teams all year to do the same in the Tournament.

My dad always told me common sense was the most important thing you could bring into any decision process. So how could the NCAA make the tournament more student friendly?

I guess that would require being more true to “regions” than “seedings.”

The basketball talent on the court is amazing. But so are those students who support the players. I love the enthusiasm, the emotion, the “Fat Heads” in the stands, and the chants to support their teams…and irritate opponents. The students make college basketball. My oldest daughter went to Wake Forest and she always hoped she had saved enough money to go watch her school play.

This year, Seton Hall was seeded 9th (in my book, not fair) in the South region. OK – Seton Hall is in South Orange, New Jersey. But that’s not exactly the southern part of the United States.

Wisconsin wound up in the East…and some of that region’s games are in that great Eastern shore town of Tulsa, Oklahoma.

There are 10 teams from the East and South in the West region of the tournament…a region that is playing games in Buffalo and Orlando.

The Midwest? UC Davis, Miami, Rhode Island, Oregon, Iona and Jacksonville State have all been relocated.

The South? In addition to Seton Hall, Minnesota, Cincinnati, UCLA, Kent State, Dayton and Wichita State have all had their zip codes questioned. Oh…and some of the South games are being played in Sacramento and Milwaukee.

I know it’s a tough job. And you can’t pick neutral sites three days before the tournament starts, and thus some of the sites are cast in stone years in advance.

But I would love if the NCAA could come up with a solution to have early round games more geographically sensitive…especially for the students who want to go see their teams play.

What West Virginia student can afford the $456 for a flight (Monday’s price) to Buffalo?

Could a Rhode Island student afford the current $644 tab for a flight (Sunday’s price) to their team’s game in Sacramento?

I wish there was a way for the NCAA to help those college students who make college basketball great; it would make the tournament affordable and even better.

I hate seeing those early round games with thousands of empty seats in full view of the cameras…seats that could be filled with the students who help make the game so exciting.

P.S.: Loved seeing the CBS cameras Sunday focus on our Board Member Bob Hurley, and his wonderful wife Chris, hugging as URI – coached by their son Danny Hurley – won the A10 Tournament title.