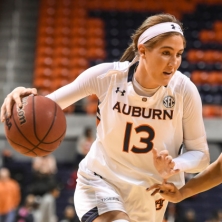 WARREN, NJ, May 11, 2017 – Katie Frerking, the SEC Scholar-Athlete of the Year and a mainstay in the Auburn Tigers’ lineup since her freshman year, has chosen to be represented by InterperformancesUSA (IPZ), the company announced today.

Standing at 6-foot-1, Frerking has the ability to play at both the guard and forward positions. Frerking, whose hometown is Johns Creek, GA, was nominated to play in the 2013 McDonald’s All-America game. In the fall of 2013, Frerking began her collegiate career with Auburn and became only the fifth freshman in the previous 10 years to start the season-opener.

In Frerking’s junior year, she averaged 11.7 points, 5.1 rebounds, 3.1 assists, and 2.5 steals per game. These stats helped land her on the CoSIDA Academic All-District Team in the 2015-16 season. She also earned this honor the following year as a senior. Additionally, Frerking was named the 2016-17 SEC Scholar-Athlete of the Year, as well as receiving All-SEC Defensive and Second Team honors. The combo player led the Tigers with 15.7 points, 6.3 rebounds, 2.6 steals, and 1.0 blocks per game, to go along with 3.0 assists per contest.

“I chose InterperformancesUSA because I felt that they were the best people to help me in beginning my professional career,” said Frerking. “I could tell from my very first conversation with Shawn that he really understood my game and was excited about the possibility of representing me. I was definitely looking for an agency that not only was best-suited to help me in the basketball realm, but also an agency that was full of great people. Everyone I’ve worked with so far at IPZ has been that. I’m excited about the opportunity to continue my basketball career and certainly excited to be teamed up with IPZ.”

“Katie is one of the most underrated players in the SEC; I love watching her play,” said IPZ’s Managing Director of Basketball Shawn Farmer. “She can flat out play the game and her basketball IQ is off the charts. With her size and versatility, Katie will be a valuable asset to her future professional team.”