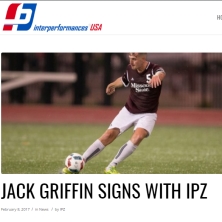 WARREN, NJ, February 8, 2017 — Jack Griffin, a central midfielder who made an impact for the Missouri State University Bears since his freshman debut, has signed with InterperformancesUSA (IPZ), the company announced today.

The Beverley, England native was a mainstay in the Bears’ lineup playing in 71 of the Bears’ 73 matches during his tenure. Jack is known for his leadership and as captain his senior season, he led the team to a successful campaign.

Griffin compiled numerous honors beginning in his freshman year when he was named to the Missouri Valley Conference All-Freshman Team. The following season, Griffin received an All-MVC Honorable Mention. In 2015, he was the only Bear to be named to the All-MVC First Team and he capped off his senior campaign in 2016 with All-MVC Second Team honors. Griffin was also selected to the All-West Region Third Team twice, in 2015 and 2016.