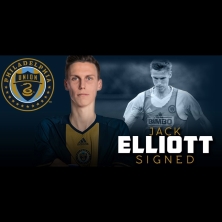 Jack Elliott has signed an MLS contract with the Philadelphia Union, who selected Elliott as their fourth overall pick in the 2017 MLS SuperDraft in January.

“We are excited to welcome Jack to the Union as he officially signs an MLS contract and joins our centerback group,” said Philadelphia Union Sporting Director Earnie Stewart. “When you look at Jack, the first thing you notice is his height, an asset that we believe will serve him well as a professional. He is a good passer who reads the game well. He has performed well in preseason and we look forward to working with him this season and beyond.”

“To go from playing in England, come through college and to make it here has been a dream come true so far, best I’ve felt in a long time,” said Elliott, the London, England native who played collegiately for the West Virginia University Mountaineers.

“It is terrific to see a player’s dream come to fruition and we are pleased to see Jack sign his first professional contract with a first-rate club like the Philadelphia Union,” said Robert Zito, Managing Partner of IPZ, which represents Elliott. “We are thrilled for Jack as he officially begins his professional career.”