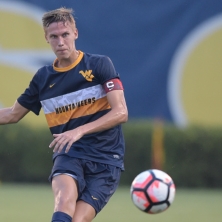 The London, England, native towers over his competition standing at 6-foot-5. Elliott was a center back and defensive midfielder for West Virginia University and he missed just one match in his four years with the Mountaineers. During his senior year, Elliott led a WVU defense that posted eight shutouts, and he was named to the All-Great Lakes Region First Team by the National Soccer Coaches Association of America (NSCAA), as well as the All-MAC (Mid-American Conference) Second Team.

In addition to his on-the-field success,  Elliott excelled in the classroom posting a 3.96 grade-point-average which landed him three Academic All-American honors. He was the first WVU men’s soccer player to achieve this feat.

Elliott expressed his gratitude to all who have helped to make this possible, “Thank you to the Philadelphia Union for giving me this opportunity,” Elliott said after the draft. “It’s something that I have been working toward for a long time and will continue working at. A great thanks to everyone that has supported me throughout the years.”

“Jack is a physically imposing defender who has the ability to initiate a team’s attack with his great vision and quality distribution,” said Robert Zito, Managing Director of IPZ. “He embraces one-on-one defensive battles, is technically gifted with both feet, and is an extremely intelligent individual both on and off the field. Jack has been a pleasure to work with since our initial contact and we are thrilled to have him officially join the IPZ family.”

About Zito Partners: Zito Partners builds, energizes and defends brands. A boutique firm representing a select group of clients from a range of industries, Zito Partners believes in a “ready, aim, fire” approach – understand the client…develop the appropriate strategy against the key target constituencies…and execute against the plan. And through its strategic alliance with Ketchum, Ketchum Zito Financial, Zito Partners is assisting additional clients with their financial communications needs.  For more information, visit www.zitopartners.com.