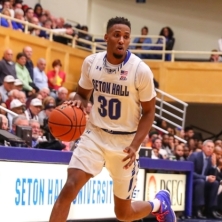 WARREN, NJ, May 16, 2017 – Madison Jones, the court general that led the Seton Hall Pirates this past season, has chosen InterperformancesUSA (IPZ) for representation, the company announced today.

The 6-foot-2 point guard began his collegiate career at Wake Forest University which is under two hours away from his hometown of Raleigh, North Carolina. Jones broke into the starting lineup as a freshman. In all three seasons with the Demon Deacons, Jones consistently found himself in the top two for the team’s most assists and steals (he was first in this category twice). As a junior, he ranked among the ACC leaders with a 1.6 assist-to-turnover ratio.

“I am so happy to be a part of the IPZ family,” said Jones. “I have dreamed about being a professional basketball player since I was a young boy. I can’t thank God enough for this amazing opportunity.”

“Meeting Madison and his parents during this process was rewarding for me,” said Robert Zito, Managing Partner of IPZ. “Madison comes from a great family with dedicated parents and siblings who are serving our country. His leadership on the court at Seton Hall was exemplary. And his relationship with a great coach and staff, phenomenal. I’m thrilled we have the opportunity to work with him.”