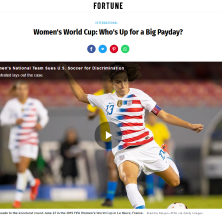 Women’s World Cup: Who’s Up for a Big Payday?

The U.S. women’s soccer team is crushing it on the field, winning its first three FIFA World Cup matches by a combined score of 18-0, but who—besides Alex Morgan—will collect after the tournament?

This year’s FIFA World Cup has generated more buzz, more content, and more dollars for female footballers than any women’s World Cup before. With an expected one billion viewers of the tournament globally, as defending champs, Team USA’s mixture of familiar faces and newcomers have racked up plenty of paid partnerships.

Plus, the team has a compelling off-field agenda, where winning could propel women’s athletics globally. In March, 28 players filed a gender discrimination lawsuit against the United States Soccer Federation, citing lower pay and unequal working conditions. That move, too, has drawn corporate support. Sports bar Luna has promised to pay each woman on the roster $31,250 to compensate for the bonus difference paid to men versus women who made the World Cup team.

“The World Cup and the Olympics put the sport under a microscope,” said Jeff Curtin, managing director of sports marketing firm IPZ and head of its soccer practice. The firm does not have any clients playing in the World Cup. “From an individual perspective, this is the moment to capitalize.” While Curtin noted endorsement deals on the men’s side are “exponentially larger” (top-endorsed male footballer Cristiano Ronaldo, for example, made $47 million in 2018), he emphasized “the women’s side is growing.”