Helping the FDNY with the NFL and others 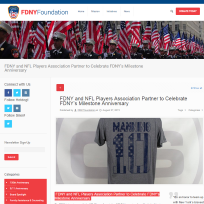 The FDNY is teaming up with the NFL Players Association (NFLPA) to create a line of limited-edition t-shirts celebrating the FDNY’s 150th anniversary.

“The FDNY is excited to partner with New York’s football stars and the NFL Players Association to continue the yearlong celebration of the Department’s 150th anniversary,” said Fire Commissioner Daniel Nigro. “This great partnership highlights the brave work of our members and will raise important funds for the FDNY Foundation, helping the FDNY to better protect New York.”