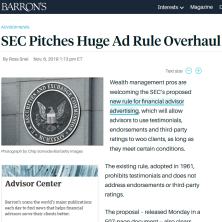 Wealth management pros are welcoming the SEC’s proposed new rule for financial advisor advertising, which will allow advisors to use testimonials, endorsements and third-party ratings to woo clients, as long as they meet certain conditions.

The existing rule, adopted in 1961, prohibits testimonials and does not address endorsements or third-party ratings.

The proposal – released Monday in a 507-page document — also clears away vexing confusion related to online communications: It broadens the definition of advertising to “include communications ‘disseminated by any means.’”

The existing rule required advisor advertising to be a “written” communication, or an announcement on radio or television, which left advisors to fret about whether their social media use would get them in trouble.

“The fact that the new proposed rules would allow testimonials and endorsements — that’s huge,” said Zulay Hunter, chief compliance officer at GenTrust, a Miami-based RIA with about $1.6 billion in assets under management. “Advisors want to be more active in social media.”