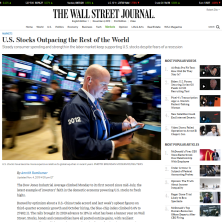 U.S. Stocks Outpacing the Rest of the World

Global stocks are lagging behind U.S. shares, illustrating how investors’ faith in the domestic economy continues to drive a growing divergence in financial markets.

After rising to a fresh record last week following upbeat figures on third-quarter economic growth and October hiring, the S&P 500 ended Friday up 22% for the year and on track for its best annual performance since 2013. Major indexes climbed again Monday, with the S&P climbing 0.6% on trade optimism and the Dow Jones Industrial Average advancing 0.5% shortly after the opening bell. That climb put the Dow on track for its first record close since mid-July.