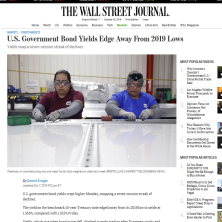 Yields, which rise when bond prices fall, climbed in early trading after European stocks and oil prices gained. Energy is an important indicator of inflation, which threatens the value of bonds’ fixed principal and interest payments.

Federal-funds futures, which investors use to bet on central-bank policy, show about a 3-in-4 probability of a rate cut this month, compared with 40% a week ago, according to CME Group data.

Investors could get a new reading about interest-rate policy this week when the Fed on Wednesday releases minutes of its September meeting. Last month, officials cut interest rates for a second time this year, though two officials voted to keep rates steady.

Some investors are concerned that signs of manufacturing weakness could lead to a further slowdown in job growth and send ripples throughout the economy. Weakness in manufacturing was one major factor weighing on yields last week, after the Institute for Supply Management’s manufacturing index posted its lowest reading in three years.

That was troubling because “if it bleeds into the labor market, it bleeds into consumer sentiment,” said Hugh Nickola, head of fixed-income at GenTrust, LLC.

While the S&P 500 remains near record highs, recent gains in stocks that tend to perform better in periods of slower growth mark a sign “there is underneath the surface a considerable amount of stress” among investors about the economy, Mr. Nickola said.