ETFMG MJ’s Jason Wilson in The Globe and Mail 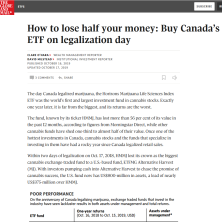 How to lose half your money: Buy Canada’s pioneering pot ETF on legalization day

The day Canada legalized marijuana, the Horizons Marijuana Life Sciences Index ETF was the world’s first and largest investment fund in cannabis stocks. Exactly one year later, it is far from the biggest, and its returns are the worst.

The fund, known by its ticker HMMJ, has lost more than 56 per cent of its value in the past 12 months, according to figures from Morningstar Direct, while other cannabis funds have shed one-third to almost half of their value. Once one of the hottest investments in Canada, cannabis stocks and the funds that specialize in investing in them have had a rocky year since Canada legalized retail sales.

Within two days of legalization on Oct. 17, 2018, HMMJ lost its crown as the biggest cannabis exchange-traded fund to a U.S.-based fund, ETFMG Alternative Harvest (MJ). With investors pumping cash into Alternative Harvest to chase the promise of cannabis success, the U.S. fund now has US$800-million in assets, a lead of nearly US$375-million over HMMJ.