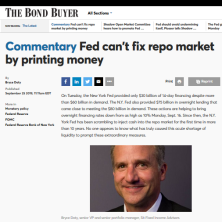 On Tuesday, the New York Fed provided only $30 billion of 14-day financing despite more than $60 billion in demand. The N.Y. Fed also provided $75 billion in overnight lending that came close to meeting the $80 billion in demand. These actions are helping to bring overnight financing rates down from as high as 10% Monday, Sept. 16. Since then, the N.Y. York Fed has been scrambling to inject cash into the repo market for the first time in more than 10 years. No one appears to know what has truly caused this acute shortage of liquidity to prompt these extraordinary measures.

Some theories highlight the need to settle recent large Treasury auctions, which is ridiculous. The demand for Treasuries has been incredibly strong and driving yields sharply downward. There is no need for anyone to borrow money at 10% in order to hold Treasuries. They would simply sell the Treasuries into a strong bid and move on. Other theories are equally suspect.

The one thing we know that happened with certainty is that 50% of Saudi Arabia’s oil production was taken out with relative ease which sparked a flight to quality when markets opened the following Monday when repo rates spiked to 10% and forcing the fed funds rate to pierce the upper range of the Fed’s target range.

All the while when there is $1.4 trillion in excess reserves. There is so much excess reserves awash in the banking system that if the Fed didn’t pay interest on those excess reserves, the actual overnight rates charged between banks to borrow money overnight (the fed funds rate) would fall to nearly zero regardless of the target the Fed sets for fed funds.

Even though the Fed reduced the interest they pay banks on excess reserves to 1.80%, it is nearly impossible to convince a bank to risk lending any of that money during times of stress. Why take the risk when you are earning one of the highest yields possible in the treasury market with complete and instantaneous liquidity and zero interest rate risk?
If the Fed thinks it can simply print money to relieve the stress, it only proves Fed officials don’t fully understand the issue. Printing another $1 trillion will simply cause the excess reserves at the Fed to climb by a $1 trillion with an imperceptible improvement in the repo market. There simply is so little incentive for banks to do anything else with the money other than hold it at the Fed, especially when things get dicey. It won’t matter if they printed $10 trillion.

Clearly there is already too much excess reserves already or the fed funds rate wouldn’t need to be supported by the rate paid on excess reserves. Demand would keep the rate up naturally if there truly was a shortage of reserves. And yet the Fed is dumping what they believe is temporary funds into the repo market and intend to resume printing money in earnest next month to resolve the liquidity crisis.

Bond investors aren’t buying it. They know these actions aren’t solving the underlying liquidity problem caused by the Fed paying too much on 100% of banks’ excess reserves. That is a big reason the 30-year Treasury yield continues to go lower and lower despite the increasing amount of repo financing provided. It reflects a growing sense of fear that quarter end financing needs will break the system.

Now imagine how much better it would be if the Fed only paid interest on half of the excess reserves and required the other half to be invested in T-Bills and other short term financing such as overnight repos. $700 billion of liquidity would flood into the financial system and dramatically reduce financing costs and stabilize repo markets. Minutes from previous Fed meetings show that the Fed has been considering similar options to this since last February. What are they waiting for?