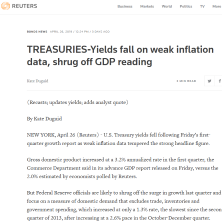 Gross domestic product increased at a 3.2% annualized rate in the first quarter, the Commerce Department said in its advance GDP report released on Friday, versus the 2.0% estimated by economists polled by Reuters.

But Federal Reserve officials are likely to shrug off the surge in growth last quarter and focus on a measure of domestic demand that excludes trade, inventories and government spending, which increased at only a 1.3% rate, the slowest since the second quarter of 2013, after increasing at a 2.6% pace in the October-December quarter.

The Fed is also likely to focus on the disappointing core personal expenditures consumption price index figure, which increased at only a 1.3% rate versus 1.8% in the prior quarter. PCE is the Fed’s preferred metric of inflation.

“From a Treasury perspective, the Fed is going to focus on the inflation number,” which is why yields fell, said Stan Shipley, strategist at Evercore ISI. “Offsetting the GDP growth was the GDP deflator, which was 0.9%.”

At present, 40.9% of traders predict that the Fed will have cut interest rates by 25 basis points by the end of the year, according to CME Group’s FedWatch tool. Yesterday, 41.8% of traders believed rates would stay where they are through December. Now, that number is 35.5%.

What’s more, the higher-than-expected GDP figure owed its outperformance to trade and the largest accumulation of unsold goods since 2015, temporary factors that are likely to reverse in the coming quarters.

“While the consumer did pull back from their torrid holiday buying in the fourth quarter, trade and inventory rebuilding added an outsized 1.7% to GDP. GDP was expected to be 2.3% and without the boost from trade and inventory, GDP would have actually missed,” said Bryce Doty, senior portfolio manager at Sit Fixed Income Advisors.