BILLY MCCONNELL: THE NEWEST MEMBER OF THE IPZ FAMILY 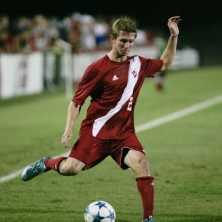 McConnell is a 5-foot-10 defender from Richboro, PA and led the Indiana defense that posted 11 shutouts in the 2016, a Big Ten best. Also during his senior year, he scored the game-winning goal on a header against #23 Akron in the NCAA Tournament. McConnell tallied three goals, two assists, and 10 points to go along with a shooting percentage of .429. The Hoosiers ranked as high as #4 during the 2016 season.

In McConnell’s junior campaign, he started all 21 matches, which included 10 shutouts. He was named to the Mike Berticelli All-Tournament Team in 2014. Going into his first year with Indiana, McConnell was named to the Top Drawer Soccer Preseason Best XI Freshman Team.

“I’m very excited to be a part of the team. I chose IPZ because the team is motivated and has only the best interest of the players in mind,” said McConnell. “As my professional career begins, I wanted to make sure I chose the right agency. When I met with Jeff, I was instantly interested in what he had to say about what the organization likes to do for their players. IPZ felt like the best fit for me to begin my professional career.”

“Billy is a very athletic and versatile defender who can play both centrally or out wide,” said Jeff Curtin, IPZ’s Managing Director of Soccer. “He reads the game very well, is strong in possession, and always seems to win his one-on-one defensive battles. Billy’s versatility, competitiveness, and professionalism make us very excited about having him join the IPZ family.”

About Zito Partners: Zito Partners builds, energizes and defends brands. A boutique firm representing a select group of clients from a range of industries, Zito Partners believes in a “ready, aim, fire” approach – understand the client…develop the appropriate strategy against the key target constituencies…and execute against the plan. And through its strategic alliance with Ketchum, Ketchum Zito Financial, Zito Partners is assisting additional clients with their financial communications needs.  For more information, visit www.zitopartners.com.