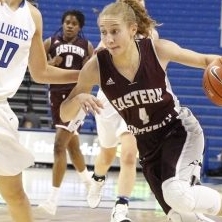 Hailing from Rocky Mount, NC, the 5’8 guard was named to the Ohio Valley Conference (OVC) Commissioner’s Honor Roll in 2015-16 as a junior. In her senior season, Cooper was named to the 2016-17 CoSIDA All-District Team.

On her senior night, Cooper tied her career-high of 26 points connecting on eight of 12 three-pointers against Tennessee Tech. Cooper put together an impressive senior campaign, as she ranked in the top 15 of five categories among OVC leaders. Cooper ranked #4 in minutes played averaging 34.3 per game, #5 in three-point field goals made per game with 2.4, #8 in steals per game with 1.6, #9 in three-point percentage shooting 36%, and #13 in scoring, averaging 12.7 points per game.

“I’m so excited to be working with IPZ,” said Cooper. “With such promising success, I couldn’t imagine being elsewhere to begin my professional career. I know they only want the best for their athletes, I’m fortunate to be a part of the IPZ family.”

“I’ve had the luxury of working with a lot of basketball players over the past 15 years, but Alexus is one of – if not the – most hard-working and intelligent athletes I’ve worked with,” said Shawn Farmer, IPZ’s managing director of basketball. “Alexus has outstanding character and I look forward to seeing what her future holds.”