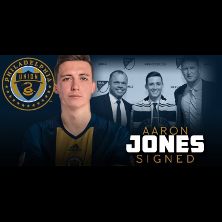 WARREN, NJ, February 24, 2017 — Aaron Jones has signed an MLS contract with the Philadelphia Union, who selected Jones as their second overall pick in the 2017 MLS SuperDraft in January.

“We are pleased to sign Aaron to an official MLS contract,” said Philadelphia Union Sporting Director Earnie Stewart in a team press release. “Aaron has impressed throughout his time with us in preseason camp, displaying quickness, his ability in passing and on free kicks, and his aggressive one-on-one defending. We look forward to bringing him aboard officially and tracking his development at the rightback position over the years to come.”

Following Philadelphia’s official announcement of his signing, Jones, a native of Great Yarmouth, England who played collegiately at both Georgia State and Clemson, tweeted his gratitude towards the Union. “I’m over the moon to have finally signed my first professional contract with such a great organisation. There are plenty of hours of hard graft ahead but I can’t wait to pull on the Navy & Gold of the Philadelphia Union and help the team be successful in any way possible.”

“We are delighted to see Aaron sign his first professional contract with a top-notch organization like the Philadelphia Union,” said Robert Zito, Managing Partner of IPZ, which represents Jones. “It is wonderful to see a player’s hard work pay off and we could not be more excited for Aaron as he embarks on his professional career.”