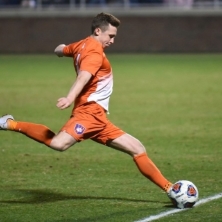 The 5-foot-9 right back hails from Great Yarmouth, U.K. and began his college career at Georgia State University. He was named to the 2013 College Sports Madness All-Independent Second Team during his freshman year and the 2014 All-Sun Belt Conference Second Team in his sophomore season.

In January 2015, Jones transferred to Clemson University and helped the Tigers reach the Elite Eight. His game-tying goal against UC Santa Barbara in the Sweet Sixteen was featured on SportsCenter’s Top 10 plays. During his senior campaign, Jones tallied three goals, four assists, and 10 points, and Clemson made a return to the Elite Eight. The program was ranked #1 in the final RPI poll for the 2016 season.

Jones has tweeted to Philadelphia Union fans that he can’t wait to begin his MLS career in the City of Brotherly Love, especially after watching the documentary that brought the Union to Philadelphia, Sons of Ben: The Movie. “Even more excited to get started with @PhilaUnion after hearing their story #SonsOfBen,” he wrote.

“I’m delighted to join the Union and excited at the direction that franchise is moving,” Jones said. “I had hoped to have the opportunity to play on the East Coast, and there couldn’t be a better franchise than Philadelphia.”

“Aaron is a dynamic defender who reads the game very well,” said Robert Zito, Managing Director of IPZ. “He embraces the defensive aspects of the game, is strong in possession, and has the technical and athletic ability to join in the attack and provide quality service. These qualities in combination with Aaron’s professional approach on and off the field make us very excited about having him join the IPZ family.”

About Zito Partners: Zito Partners builds, energizes and defends brands. A boutique firm representing a select group of clients from a range of industries, Zito Partners believes in a “ready, aim, fire” approach – understand the client…develop the appropriate strategy against the key target constituencies…and execute against the plan. And through its strategic alliance with Ketchum, Ketchum Zito Financial, Zito Partners is assisting additional clients with their financial communications needs. For more information, visit www.zitopartners.com.